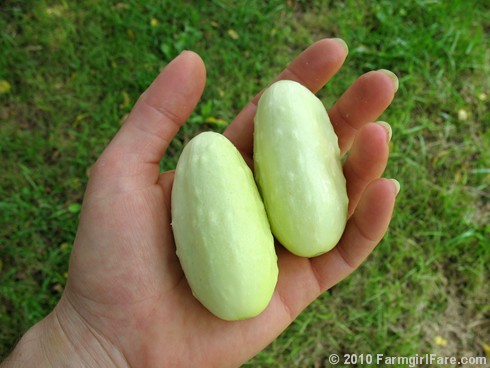 You can read more about growing these cute little crunchy cucumbers in my previous post, Easy to Grow from Seed Favorites: Miniature White Cucumbers.
Realization of the Day:
This is shaping up to be the year of experimental fall planting.
I generally have pretty good luck growing cucumbers. Between my own harvests (lemon cucumbers are another favorite or mine to grow) and the excess bounty purchased from my Amish friends, I haven’t bought a supermarket cucumber in years.
This past spring I started three varieties of cucumber seeds in flats, and for various reasons (the main one being that I probably didn’t plant the seeds deep enough and they washed away when I watered them—yeah, duh) I didn’t end up with any cucumber plants. Then, again for various reasons, I never got around to starting any more cucumber seeds directly in the ground once the soil had warmed up.
Thankfully some other gardeners around here fared better than I did in the cucumber department, and I was able to buy some nice ones (along with some really bitter ones). But because of the heat and drought (which is what made those bitter ones bitter), the local front yard pop-up produce stands closed down almost as soon as they opened up this year.
Fast forward a couple of months to a desperate me, trying to work on some new summer recipes. I finally broke down and bought some supermarket cucumbers. Blech.
I’ve already direct seeded two of my 4’x8′ raised beds with cool season crops—something I’ve never done as early as August before—and on a whim, I also stuck half a dozen miniature white cucumber seeds into a bare spot in the homemade greenhouse. A couple of days later, four of them sprouted.
More below. . .