Atropa belladonna, commonly known as belladonna or deadly nightshade, is a poisonous perennial herbaceous plant in the nightshade family Solanaceae, which also includes tomatoes, potatoes, and eggplant (aubergine). It is native to Europe, North Africa, and Western Asia. Its distribution extends from Great Britain in the west to western Ukraine and the Iranian province of Gilan in the east. It is also naturalized or introduced in some parts of Canada and the United States. 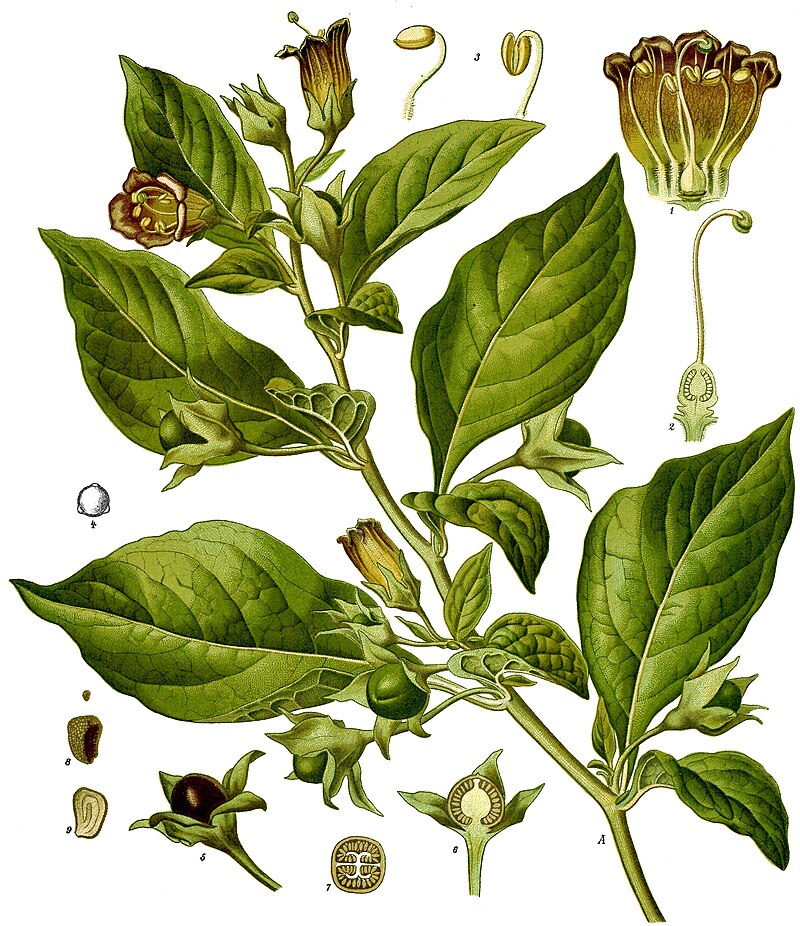 The foliage and berries are extremely toxic when ingested, containing tropane alkaloids.

All parts of the belladonna plant—including its leaves, flowers, fruits, and roots—are highly toxic, thanks to the presence of tropane alkaloids such as atropine, scopolamine, and hyoscyamine.

Ingestion poses the most danger, but the toxins can also enter the body through open wounds, cuts, or abrasions.

In healthy skin, contact with any part of the plant can cause a severe allergic reaction.

Due to their slight resemblance to wild edible berries such as blueberries and blackberries, the purplish-black, sweet-tasting fruit of belladonna poses a particular risk of being ingested.

Belladonna is also highly toxic and lethal to dogs, cats, horses, and other domesticated animals.

However, it is not toxic to birds, deer, rabbits, and other woodland animals.

These toxins include atropine, scopolamine, and hyoscyamine, which cause delirium and hallucinations and are also used as pharmaceutical anticholinergics. These tropane alkaloids appear to be common in the family Solanaceae, as they are also present in plants of the genera Brugmansia, Datura, and Hyoscyamus, of the same family but in different subfamilies and tribes than the nightshade.

The antidote for belladonna poisoning is physostigmine or pilocarpine, the same as atropine.

leaves and roots of the Belladona can be bought with a medical prescription in pharmacies throughout Germany.

In the United States, there is only one approved prescription drug containing belladonna alkaloids such as atropine, and the FDA regards any over-the-counter products claiming efficacy and safety as an anticholinergic drug, to be illegal.

Because of its highly toxic properties, belladonna has been deliberately used as a weapon and poison throughout history.

Romans contaminated the food reserves of their enemies with it and, in 1030

Scotland’s King Duncan used it to defeat the Danes by giving them belladonna to drink.

In World War II, atropine sulfate was administered as an antidote to nerve gas, and given to troops so they could inject themselves in case of an attack.

Up until the early-to-mid-twentieth century, belladonna was used to treat a variety of conditions including neuralgia, chronic rheumatism, muscle and back pain, and pulmonary tuberculosis 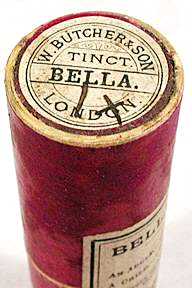 Belladonna has been used in herbal medicine for centuries as a pain reliever, muscle relaxer, and anti-inflammatory, and to treat menstrual problems, peptic ulcer disease, histaminic reaction, and motion sickness.

At least one 19th-century eclectic medicine journal explained how to prepare a belladonna tincture for direct administration.

In homeopathic practices, belladonna was prescribed by German physician Samuel Hahnemann as a topical medication for inflammation and pain.[1]

In the form of Doktor Koster’s Antigaspills, belladonna was a homeopathic medication for upset stomach and excessive flatulence. There is insufficient scientific evidence justifying the use of belladonna for these or any other clinical disorders.

In 2010 and 2016, the US Food and Drug Administration warned consumers against the use of homeopathic teething tablets and gels containing belladonna as used for infants and children, stating that the products may be toxic, causing “seizures, difficulty breathing, lethargy, excessive sleepiness, muscle weakness, skin flushing, constipation, difficulty urinating, or agitation”.

Atropa belladonna and related plants, such as Datura stramonium (commonly known as jimson weed), have occasionally been used as recreational drugs because of the vivid hallucinations and delirium they produce.

These hallucinations are most commonly described as very unpleasant, and recreational use is considered extremely dangerous because of the high risk of unintentional fatal overdose

] The main psychoactive ingredients are the alkaloids scopolamine and, to a lesser extent, hyoscyamine.

The effects of atropine on the central nervous system include memory disruption, which may lead to severe confusion.

Belladonna is one of the most toxic plants known, please be careful

i have found a very interesting article called :

Everything You Need To Know About Traditional Chinese Medicine

i think its very well written by Joy Parry , and its really worth for you to check it out

grow flowers in the Urbipod